"Turkish Towels” continues to draw attention of professional buyers and to be known all over the world with its quality and originality.

Canton Fair, held in Guangzhou/ China twice a year in May and November, is one of the most important fairs in the world. 20 companies from Denizli took part in 123rd. Canton Fair between 1st-5th of May, 2018 and the member companies of Denizli Exporters Association took the opportunity to meet representatives of sector in the fair that became the meeting point of global buyers.

Canton Fair is known for being the oldest and the most comprehensive fair of China. In the recent years, reputation of "Turkish Towels” has increased in China which has become the center of attraction both with the raising level of welfare and the boasting economy..

An Award for Denizli Exporters Association from Canton Fair !!!

In Canton/China Import and Export Fair, "123rd. Canton Fair International Pavillion- The Most Prestigious Business Partners Award” was presented to Denizli Exporters Association on behalf of exhibitor companies from Denizli.

Mr. Arif Şensöz, The Chairman of Neşe Textile Company received the award on the behalf of Denizli Exporters Association and during his vote of thank Mr. Şensöz emphasized the importance of Canton Fair in terms of Turkish export of home textile, he also stated that Turkish Towels with its own brand had a lot of interest by The Chinese and European Buyers... 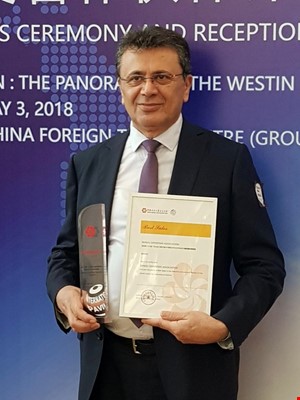